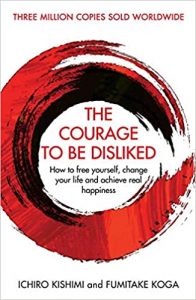 Why did I choose to read this book?

The theme of being explicitly disliked was not a topic I can say I had given much thought to. Having said that, most people including myself do spend a good portion of their time concerning themselves with being liked. In life, we can all expect to meet people with all manner of personality types and satisfying everyone all of then time can quickly feel like an impossible task.

In terms of my career, I feel like I have always been hypersensitive to a colleague’s potential opinion of myself. This can often push you to go the extra mile, but it can also cause you to overthink things in the search to satisfy everyone.

Reviews on this book where excellent so I delved in with an open mind hoping to take something positive from it both on a personal as well as a professional level.

How was the book structured?

The entirety of the book was structured as a conversation, between a philosopher and someone simple titled as the ‘Young Man’. it is not clear how young this man is, but he does offer a complete contrast to the wise elderly philosopher. it worked rather well for me as I often found myself thinking of the same questions the young man was asking.

Understanding the complicated nature of why we seek approval from others.

The idea of tasks and their relationship with any given person is a key concept constantly pushed throughout this book. In a nutshell, the idea is that you have your own tasks whilst others have theirs.

Someone approving of your actions is not your task but the person seeking to approve. Ultimately it’s not your concern and it shouldn’t be. Most problems that we have in life are described as interpersonal problems that often stem from us trying to infringe on other people’s tasks or trying to coerce people to do our tasks. The author goes through multiple examples to try and reinforce the idea and by the end of the book I felt myself just about jumping on board with the idea, if not fully bought in

The seeking of approval in the first instance often comes from a place of competition. To emphasise this point the author describes the idea as seeing fellow humans as comrades as opposed to enemies. As uncomfortable as it made me feel I felt myself relating to some of these points. The word enemy is definitely a strong word but I definitely feel I can make more effort within myself to see more people as my comrades.

The author retells of an old Jewish saying –

‘If there are ten people, one will be someone who criticises you no matter what you do. This person will come to dislike you, and you will not learn to like him either. Then, there will be two others who accept everything about you and whom you accept too, and you will become close friends with them. The remaining seven people will be neither of these types.’ Now, do you focus on the one person who dislikes you? Do you pay more attention to the two who love you? Or would you focus on the crowd, the other seven? A person who is lacking in harmony of life will see only the one person he dislikes and will make a judgement of the world from that.

Coming to terms with the idea that in order to live your life in a way that makes you happy will ultimately cause a proportion of people to dislike you. if anything that should give you comfort that you are living your life in the way that you have chosen.

The idea of horizontal relationships, in which both parties see each other as equals seemed like an obvious concept but can often be absent in most settings. Although I can’t enforce others to treat me equally, I can at least enforce myself to treat others equally.

The author describes the idea of complimenting someone to be by its very nature, a condescending action – I found this odd at first but the more I thought about it, the more sense it made. If someone compliments you on a job well done it automatically denotes that they are the approval bearer of your efforts. I found the idea of showing gratitude only a slight tweak but an overall better option. For instance instead of saying ‘Well Done’ say ’Thanks for your efforts’.

Were my expectation met?

I’m not sure if I expected this book to change me overnight. Although I am definitely the same person after completing it, I feel it has highlighted some very important points regarding my thoughts and expectation when it comes to other people. It has helped put a number things in my own life into perspective and at the least, it has given me the courage to care less about things that have no bearing with regards to the bigger picture, if not everything. Life is a series of moments that come and go!